Owners must take their microchip certificate or the dog so it can be scanned, to their council so that the information can be recorded and placed on the National Dog Database. Until the information is recorded by the council owners have not met their legal obligation.

The database holds details of all registered dogs, their owners and any infringements that may have been issued against an owner or person in charge of a dog. When a dog is picked up by council officers they will be able to check the database, locate the owner and contact them.

Only authorised council representatives can access the database. However, under the Dog Control Act, vets and the SPCA can phone the council to access the owner information for legal purposes (such as treating a dog). The Department of Internal Affairs has limited access to general information on the database for policy development purposes.

All quantity requirements are catered for but as a general rule;

Sterile Syringe microchip packs are supplied in dispenser cartons of 20 units with 10 cartons to a shipping outer. ie. 200 units

Sterile Bulk Needle packs are sold in dispenser cartons of 30 units (including 3 re-useable Syringe units per carton), with 10 cartons to a shipping outer. ie. 300 units

When ordered, paper based registration is provided in matching quantities while online registration can be pre-paid and utilised across a number of practices in any vet group.

Readers/Scanners are sold in any quantity 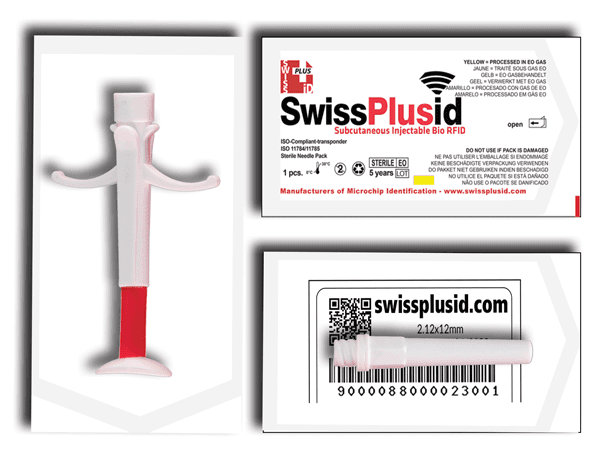 In order to reduce sharps waste we created the double plunger syringe implanter. This means the microchip is delivered in its own sterile canula (needle) pack, a sterile sealed pouch which includes a protective cap and a set of matching barcodes.
In every dispenser carton we provide 30 individually packed canula’s together with 3 re-usable ergonomic syringe/implanter devices.
Post application the needle is unscrewed, the cap re-applied and the needle assembly unscrewed and disposed of. This means that the syringe element can be re-used multiple times, reducing waste. 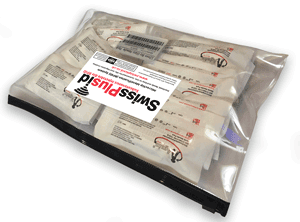 In every SwissPlus iD ziplok pack we provide everything you require. regardless of the microchip size (8mm or 12mm).

Ziplok packs are shipped in outers of 20 for syringe packs and 10 for needle/cannula packs.

Equine:
There are two recognized implantation sites currently in use:

Agricultural Animals:
The implantation site for bovine, ovine, porcine, caprine and/or other species used for meat production is subcutaneously at the base of the left ear on the scutiform cartilage or alternatively under the tail.

Elephant:
Subcutaneously on the left side of the tail in the main caudal fold.

Hyrax and Loris:
Subcutaneously on the left side of the intra lumbar area.

Alpacas: (as per Australia)
Subcutaneously midway on the left neck or top of the head behind left ear

The microchip is to be implanted into the lymphatic cavity.
The implantation site should be sealed with tissue glue.

Chelonia:
Left hind limb socket. Use a subcutaneous site in small Chelonia and an intramuscular technique in large species as well as small species with thin skin. The implant site should be sealed with tissue glue.
Hibernating species should be implanted several weeks before the end of their active season in order to allow healing before hibernation.

Lizards:
12.5 cm snout to vent length: subcutaneously in the left inguinal region.
12.5 cm snout to vent length: intracoelomic. Snakes:
There are two possible implant sites:
1. Subcutaneously on the left side of the neck, twice the length of the head from the tip of the nose.
2. Subcutaneously into the muscle on the dorsal aspect of the tail.
Note: Due to size of the implanter needle (4mm), and the possibility of injury to the reptile, it is recommended that snakes below 13mm in diameter not be microchipped. For these reptiles (eg twig snakes),dispensation not to implant a microchip should be applied.

Chelonia:
1.5 kg adult weight and/or long-legged: subcutaneously at the base of the neck.
1.5 kg adult weight: intramuscularly in the left pectoral muscle. Direct the implanter in the caudal (downward) direction. Use tissue glue and digital pressure or suture to seal the implantation site. Exceptions to the above:
Ostrich:
Up to four days old – implanted in the piping muscle behind the head on the left.
Older birds – subcutaneously at back of head (not subcutaneously in left thigh as ostrich are commonly used as food
animals.)